This story is written by me, VCL. I'm the OpenKore project leader, and I'm one of the people who started OpenKore back in late 2003. I'm also one of the few people who haven't left the Ragnarok Online botting community. The first time I started playing Ragnarok Online was in May or July 2002, when iRO (the international server) was still in a period call "beta 2", and was free.

The history of botting

I first played manually, but it soon became boring and tedious. That's how I started looking at bots. I can't say a lot about the history of bots before I was introduced to them, so I'll just tell you what I know.

In mid 2003, there were many bots. I won't bore you with the details, but here are the most widely known:

They died because their authors have lost interest in RO.

That's great, but what about OpenKore?

You must have noticed Kore in the above table. The name looks so much like OpenKore! Surely it has got something to do with OpenKore... right?

Yes, that's right. Of all bots, Kore was unique: it was the only open source bot. Now, what was open source again? Open source means that anyone can view, modify and redistribute the source code. It may sound crazy to some people, but that is the sole reason why OpenKore exists today, and why I'm maintaining OpenKore. It encouraged people to contribute improvements back into the community, so that everyone can benefit.

Kore had one fatal flaw though: Kura, the original author who wrote Kore, didn't do anything with most of the contributions. Most contributions are just laying on the forum gathering dust, while Kura only merged a few contributions back into the main Kore program. It shouldn't come as a surprise that many contributors were not happy about that. As a result, many forks of Kore emerged.

A few prominent Kore contributors at the time were: Kura, Karasu, Solos.

No, I'm not talking about that kind of fork! The forks I'm talking about are separate versions of Kore, maintained by other people. For example, one of the contributors, Solos, made his own version called Solos Kore (skore for short) which includes his own improvements. There were other forks, but not much is known about them. For some unknown reason, Kore's website went down for months, and Kura was unavailable during all that time. So all the users who used Kore moved to skore instead. Soon skore became the most popular Kore fork.

This is not to say that Kura isn't a brilliant guy though. He was. His technical skills were very high, and he wrote most of Kore's codebase. His project management skills could use some improvements though.

Skore seemed to have replaced Kore, but Solos had the same flaw as Kura: he didn't really merge contributions back into the main program. As a result, more forks appeared, this time based on Skore. To make matters worse, after a few months Solos mysteriously left - he probably lost interest in RO. Things became very ugly after that:

We received new complaints every day.

Zzz.... tell me about OpenKore already!

OK OK, I'll go to the point! Obviously things couldn't go on like that. I had a lot of experience with open source project management, and it surprised me that neither Kura nor Solos used collaboration tools such as CVS. So I teamed up with the other Skore contributors, and founded the OpenKore project. OpenKore is based on Skore-revamped. OpenKore would not make the same mistake that Kore and Skore made:

So if I ever leave RO or get hit by a bus, the other people can pick up where I left without having to reinvent the wheel over and over again. The "Open" part of OpenKore emphasises OpenKore's open source nature.

The original Kore website came back online, this time hosted on SourceForge (just like OpenKore). But Kore was as good as dead - Kura left the scene shortly after.

One of the other Kore forks was Modkore, developed by Star-Kung. We at OpenKore tried to keep low-profile because the Skore forum was seriously polluted by people who post junk, and we didn't want those people to find OpenKore. As a result, after the fall of Skore, more and more people started using Modkore.

But Modkore - surprise surprise - suffered from the exact same flaw as Kore and Skore! Well, not exactly the same. Star-Kung did use CVS, and Modkore had multiple developers. But Modkore didn't have the cooperation and contribution culture as OpenKore had. So OpenKore slowly gained more developers, while Modkore's number of developers remained pretty much constant. A rough estimation of the botting market share at the time is:

Fast forward to early 2005. Many things have changed since 2003: iRO is no longer the only non-Korean RO server. Chinese, Japanese, Indonesian, Thai, Malaysian and Philippines servers emerged. In fact, the Philippines server (pRO) was (and still is!) the server with the most people! If you visit RO botting forums, 80% of the posts are posted by Filipinos, and almost all questions are about Modkore. Ironically, most questions were about where to download Modkore.

Something weird was going on with the Malaysian server (mRO) though. OpenKore didn't work correctly on mRO. OpenKore developers and contributors fixed that after a few months though, while Modkore did not. A few months later, in March, pRO's server was changed in the same way. So all Modkore bots suddenly stopped working on pRO! Oh no, what now? Has the Lord abandoned us? What will become of our botting life? But wait, rumor has it that OpenKore works on pRO. In fact, it does work on pRO because mRO support was fixed!

Well, it shouldn't be hard to guess what happened. The effect on OpenKore was like a waterfall. Here's a nice graph to illustrate my point: 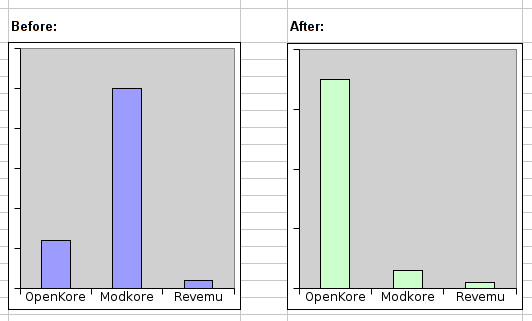 Furthermore, Modkore went closed source in mid-2005. I believe their reason was to prevent people from making kill stealing versions of Modkore. I believe it was a mistake to go closed source. Again, the benefits of open source far outweight the risks. And it's actually illegal to make it closed source, as Kore is open source and licensed under the GPL.

Oh, and have I already mentioned that Revemu has completely died? Revemu has been broken since late 2003, when iRO Comodo came. Not only was Revemu closed source, they also had very few developers. During mid 2005, someone raised the question of open sourcing Revemu on the Revemu forums. Most of the responses, even from the users, were negative, and were like:

Bollocks of course. OpenKore is the living proof that being open source brings more advantages than drawbacks. But whatever floats their boat.

Not everybody on the Revemu forums was anti-open source though. Some people want it to be open source. Some of the OpenKore developers went there to clarify why peoples' fears against open source are irrational. But a Revemu forum moderator deleted the pro-open source posts, not even allowing fair discussion. That's how anti-open source they were. Eventually they opened a poll. In the first few weeks, most people voted for "give source code only to a few selected people". After a few weeks, "open source Revemu" became the prominent choice. But the decision was already made - Revemu was not open sourced.

Well, we all know what happened to Revemu. Have you ever heard of Revemu before you read this page? Have you ever used it? No? Well that illustrates my point.

...new developers come and go. Developers who came, contributed, and went, include: jojobaoil, anu, fov, Ven'Tatsu, aputs. Without their contributions, OpenKore would not be what it is today.

Today, Modkore is almost inactive. They have almost no developers anymore. Star-Kung seems to have left the RO scene.

mRO and pRO are not the only servers that constantly change. Other servers change too. Each time, OpenKore must be modified to support the changes.

Lessons to be learned from history

OpenKore today, and the status of the botting community

Why are you still reading this? Oh well, it doesn't matter, it just matters that you are reading this. :)

OpenKore has accomplished some good things, and we should be proud on that.

Not everything is so rosy though:

The support community is very weak at the moment. Let's take a look at most the posts at the forum:

Well, you get the point (I hope). Too many people ask questions, but not enough people answer them. Most people just come here, ask a question, and then they go away without bothering to help other people (the leechers). They just want zeny and items, not realizing that such behavior will make things more miserable for everybody, including themselves. This is how the ratio looks like:

Especially alarming is the lack of developers. We have only about 3 active developers at the moment. As opposed to 15,000 users (probably more). People ask for feature requests all the time. They report bugs all the time. Furthermore, there are a few thousand private servers out there, and each day people come to our forum to complain that OpenKore does not work on their private server. Well, OpenKore won't work on their private server unless someone develops support for that server - but we have too few developers and we're all very busy!

Unless these things are dealt with, the community will go down hill, and in the near future nobody will be able to bot anymore! This is no joke, nor am I trying to scare you: I'm just being realistic.

What can I do?

You can make the difference! In fact, people like you are the ones who make a difference. OpenKore is created by the community, for the community. Join the support community! Join us to make the botting community a better place! You don't have to be a developer to be able to help.

The people who made a difference

Contact us (IRC, forums) with any comments regarding that list, such as misattribution or absense of people who contributed or assisted with code, documentation and support.